After John Grant‘s sarcastic lyrical experience, it was time for the much-anticipated AlunaGeorge at Harpa Silfurberg.

This British electric pop duo, consisting of the beautiful Aluna Fransis on vocals and the production stylings of George Reid, has been popping out a lot of hits the past year.  Surprisingly the venue was relatively empty at first, but sure enough by the third song the place got packed.  Their live show certainly did not disappoint.  With upbeat electric backings and a well-honed stage presence, this act was fun to watch as well as dance to.  The performance truly went off without a hitch and will probably be one of the most concise acts playing at Iceland Airwaves this year. 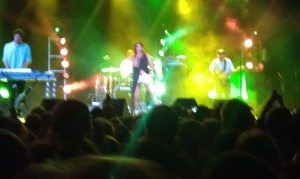 After some heavy grooving at AlunaGeorge, I ran over to catch Kimono at Harlem.  This three-piece indie rock band had phenomenal driving drums, which is probably their strongest suit.  It was interesting to see a bass guitar played with a big wooden stick.  If you go to this show it is a possibility that a complete stranger will come up to you and suck on your earlobe for a song or two, and maybe even bite you on the shoulder.

At the end of the night I flew across the street to Amsterdam to see Árni2, because who doesn’t need some more deep house in their lives?

The DJ group consisting of Árni Valur and Árni Grétar (of Futuregrapher) hits you hard right in the face with the classic low booming bass of the deep house genre against a backdrop of minimalist ambiance and trance-like arpeggios.  It was a very intimate show and when the concert goers weren’t dancing, they were shaking hands and bumping knucks with the two performers.  This show was a lot of fun and everyone was getting down. 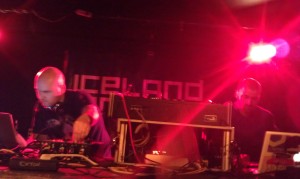 The next morning we all pried ourselves from our warm beds after only a few hours of sleep to go on Iceland’s renowned Golden Circle Tour.  We saw geysers, trenches, rivers, waterfalls, and I even climbed a mountain!

*Atop a mountain on the Golden Circle Tour

After months of trading emails with Moni and Hreinn, it was time to see Kajak at Harlem and I had very high hopes for this group.  They came through with flying colors.  This band has almost no definable genre and are innovative and unlike anything you will hear at Airwaves, or anywhere else for that matter.  Instrumentation of this band included great beats produced on a drum machine, a synthesizer, and an Indian Tabla drum.  The cousin’s dual vocals, high energy, and earthly visualization make this group a blast to see, especially in an intimate setting like Harlem.

After the show I got a chance to speak with Kajak backstage and set up an interview at Harpa to get some insight on where their totally unique songs come from.  Stay tuned for a preview of what is to come from this interview clip.

*Backstage with Hreinn (Right)  and Moni (Left) of Kajak

That’s all from Andrew on this very long yet amazing day at Iceland Airwaves ’13.