The Walking Who took the stage at Iðnó on Saturday night to perform their latest EP to Iceland Airwaves: Mansions. Vocalist Rohin Paul described to the audience his experience of living in a house together in a small ’60s house in Australia. The house was thought to be haunted after a wealthy old widow passed away and several different artists occupied the space in what Paul described as an “artistic playground,” full of relics of the house’s past occupiers. The Walking Who was experimentally psychedelic. The rock sounds that emulated from the three men’s simple composition of guitar, drum, synth and bass had a country influence. It’s not often that a band sounds like this as they made unearthly sounds to connect the slower, classic rock style.

Sometime graced Húrra Saturday night dressed in clothes that had to be seen to be considered real. Singer Diva de la Rosa came out in a clear plastic dress that displayed her colorful undergarments as synthesizer theDanni played electro-pop jams. Dancing didn’t seem to be the first thing on the local Icelanders agenda at 2 a.m. as the crowd merely bobbed up and down and didn’t move from their spots. The beats were catchy and contagious as Sometime played with claimed acid-drug-influence.

Amaury, a single DJ, spun at a table at Þjóðleikhúskjallarinn. The late night set was in the downstairs area on Friday night to a crowd of maybe 20 people, at most. Amaury described his music as using unique sounds and samples to create a sound that had not yet been done yet. The actual sound, however, was something one would hear upon walking into a classy clothing store. The electronic beats had few changes or interesting transitions. At most, Amaury was disappointing. 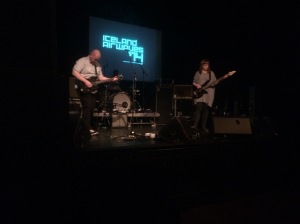 Genre-fusing Þhorir Georg kicked off the Friday night performances at Iðnó in a three-piece rock group, starting off with a low and somewhat soothing sound of fuzzy guitar and vocals. This was complemented by their calm and collected stage presence, but the excitement was still hinted at through subtle smiles during songs. By the second song, the charge kicked into the music, dominated mostly by the heavy percussion.

END_OF_DOCUMENT_TOKEN_TO_BE_REPLACED

To finish off night two of Airwaves, Thus Owls, a band hailing from Montreal, Canada, brought down Iðnó with its heavy beats and dramatic sounds. The five-piece group used several techniques and instruments unique to them. For instance, to kick off the set, guitar player, Simon Angell used a toothbrush and sponge to strum on his guitar, providing an eerie feel to the licks he produced. Erika Angell, singer of the group and wife to Simon pulled out a country harp and gave the music an ambient feel. One song they played that held particular significance was “Island.” Husband and wife, Simon and Erika said that they wrote the song while on their honeymoon in Iceland six years prior to this engagement. It did the country justice in a way that it put into perspective the vast amount of mystery hidden both outside of the city and within. The band overall sounded great however, for that venue they were much too loud. Simon also ended up breaking one of his guitar strings mid-song, but he recovered gracefully and without any interruption in the sound.

To start off day three of Iceland I went to the Ölgerðin Brewery to speak with two brew masters on the culture of beer and history of prohibition in Iceland.