Its October, which brings out the Halloween fun. Meaning pumpkin patches, costume shopping, candy and last but not least haunted houses!
But it takes a lot to be a GOOD haunted house. For me, it’s based on a few components: Scare tactics, length, and set designs.

Over the weekend I went to a haunted house, I won’t say which one because maybe it could be scary to some, but it just wasn’t for me.  Trust me, I love haunted houses, but I’m very hard to scare. Anyway, I wanted to critique what I experienced at this one!

Scare Tactics: How they scare people..

Getting scared is the biggest point of going to a haunted house. They want to get your blood pumping and freak you out with your greatest fears, being it bugs, chainsaws, or a costume of a certain character. The actors in a haunted house tend to make sudden bangs, come out of no where, or get right up towards you just to freak you out. All very useful ideas! Those can be overplayed, or not work well.

At the haunted house I experienced, they missed many opportunities to have someone come out to scare you. They did the typical “around the corner” attack, but once you see that one time you’ll be waiting for it again.  They did lots of banging on things, it kinda of just made you not think about.

Also what’s with actors trying to say something to you? I never hear it because they try to be so “scary” with it that it kinda gets missed, just sounds like blubber. They also didn’t have many people working the haunted house, so there was many rooms that didn’t have people so we just walked through it. Which wasn’t normal, and felt kinda weird cause I didn’t know if we should keep going or wait.

Length: How long to get in and how long once inside..

The length matters in how long you wait and how long you are in the haunted house. I say this because you could be waiting a long time at some places. It helps that they have people scaring you in line but sometimes it just feels like they are invading your personal space, at least that is what it was like at this place. Mainly it just seemed weird cause the costumes weren’t that well put together, so it just didn’t have that realistic touch.

How long you actually spend in the haunted house can be important. Too short of time and you could just have a bunch of people who just felt like they wasted money. This haunted house felt like a breeze to get through. Worse part is.. it was a two part haunted house! Which basically means it should have been even longer than any regular one, and should have lasted two times longer. 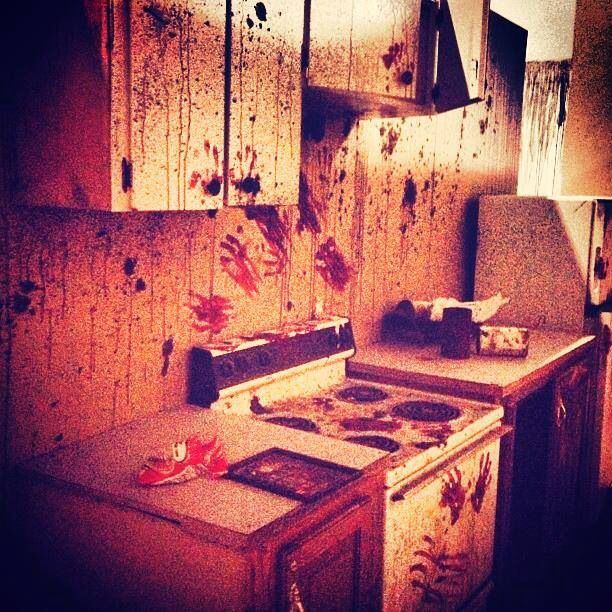 Now the set design of a place can really help with the scare tactics. You have those rooms that are decorated like a maze that gets you lost, strobe lit rooms, and ones that they have put very much effort into.

The place I went to have very amazing set designs. They had a slaughter house that was very detailed, a hoarder house that was extra realistic, and a theater that showed it’s destruction. Of course they had the maze room and a strobe lit room, but they also had a balloon path that gets you separated from everyone.

The best part of this haunted house was the set designs, we actually got to stop and admire them because of how greatly detailed they were.  But because of how slow, and limited they were with scarers, it made it less of a haunted house and more like an art project. To compare it, think of a story that you go through but it’s so slow and hard to get into and when you’re about to give up the ending has a few good points.

I may be hard to scare, but I always do like a good haunted house.  The one I went to just wasn’t one of them. If you know any that are worth checking out please let us know in the comments!

Make sure to tun into WCRX Thursdays with Kimmy Spoons and her Alternative Scoop. Only On 88.1 Fm Chicago’s Underground.

Halloween was last week, and depending how on well you did trick or treating, you’re either still eating Halloween candy right now, or going through sugar withdrawal. If you’re like me and have a rather insatiable sweet tooth, then you’re definitely experiencing withdraws right now. And so are some kids who are victims to a horrible, yet hilarious prank by late-night host Jimmy Kimmel.

Kimmel decided to resurrect a hilarious prank that he got away with last Halloween by convincing parents to tell their children that they ate all of their candy and left none for them. The kid’s reactions once they found out their parents ate all of their candy is almost enough to make tears stream down your face.

Watch the hilarity here and try and convince me you won’t laugh. (https://www.youtube.com/watch?v=1NDkVx9AzSY). Would you ever do something like that to your kids? Share your thoughts with me.

Listen to the Corey Williams Show every Friday, Mid-Day from 11am – 3pm only on WCRXFM and WCRXFM.com.